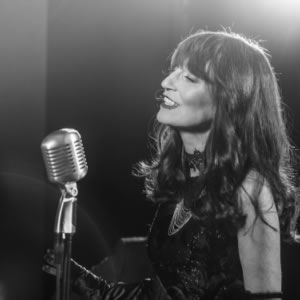 Nadia Stefanova Toncheva was born on July 24, 1961 in the town of Kazanlak. She started singing at the age of 4. At the age of 9 she enrolled in the choral school of the legendary conductor Petya Pavlovich, in her hometown. Later, she began studying piano and went to the National Music School "Hristina Morfova" - Stara Zagora. In 1982 she became a student at the "Academy of Music, Dance and Fine Arts" - Plovdiv, with specialty piano. As a pupil she sang in various vocal-instrumental groups and in 1983 won a gold medal in one of the anual national reviews of jazz orchestras. There, the composer Kiril Todorov noticed her and invited her to take part in the newly formed vocal formation "Trayana" in the town of Stara Zagora.

"TRAYANA" is the first ever Bulgarian vocal ensemble, whose works are skillfully interwoven with elements of Bulgarian folklore and jazz.

In 1987, their first LP "Trayana Voice Concert" was released, containing original works and songs by the composer Kiril Todorov, its founder. Besides songs by the head of the group, the album includes works by composers Alexander Yosifov, Alexander Brazitsov, vocal adaptation of the symphonic piece "Rhapsody Vardar" by Pancho Vladigerov, a song from the Beatles repertoire and the jazz standard "The man I love" from George Gershwin. The recordings also include musicians from the recently formed "FSB" band.

For a short time, "TRAYANA" won wide popularity. The band has participated in many radio and television broadcasts. The National Television broadcasts two musical films shot specifically for them. The group is invited to take part in the holidays on the occasion of the Bulgarian culture in Moscow in 1984 and has performed a big concert in the "Russia" Hall, where honorary guests are the two cosmonauts Georgi Ivanov and Nikolay Rukavishnikov. Apart from Russia, TRAYANA has another tour abroad in Cyprus where it has performed in front of a Bulgarian audience in the cities of Larnaca, Limassol and Nicosia. The band is an integral part of the most important musical forums: the Jazz Festival in Rousse, the competition for the Bulgarian song "Bourgas and the Sea", XXth "Golden Orpheus" Festival, where it publishes independent recitals, etc. It has also participated in the spectacular concert performance of the stars of the Bulgarian stage "To Be a Day" in 1986 in Hall 1 of the National Palace of Culture under the direction of Hacho Boyadzhiev and Big Band of Bulgarian Television and Radio with conductor Villi Kazasyan.

Nadia Toncheva makes some of the most successful vocal arrangements of the ensemble. Among them are the "Gypsy Games" - adaptation of the Brass Orchestra by Diko Iliev and two songs by the composer Krassimir Kyurkchiiski - "Shopsko Horo" and "Dilmano Dilbero", and the vocal adaptation of the symphonic piece "Ruschenitsa" by Petko Staynov is included in musical textbooks as a compulsory piece of music, and enters the repertoire of many choral collectives in the country and abroad. In the US and Canada, Razchenitsa's score has two re-releases.

The vocalists from the group are participating in the recordings of two more LPs - the album "The Long Road" by Theodosii Spassov and Folk Jazz Band Plovdiv, which are partnered with Antoni Donchev, Stefka Onykyan, Petar Ralchev, Vesselin Koichev, Docho Panov and Radul Nachkov.

"TRAYANA" takes part in the legendary concert of the prominent Bulgarian jazz musician Milcho Leviev in Plovdiv, on the occasion of his return from the USA, performing his composition "Goodbye". With a performance by Petko Staynov, in 2006, in a "Bulgaria hall", the band took part in another important concert entitled "The Immortal Work", in connection with the 110th anniversary of the composer's birth.

After leaving the band "TRAYANA", Nadia Toncheva has performed as a singer and pianist in many countries of Europe, Asia and Africa: Switzerland, Norway, Greece, Cyprus, Egypt, Israel, Syria, Lebanon, the Canary Islands, Morocco in the traditional Royal Court Celebrations and concerts on stage with local musicians and megastar Prince. Nadia Toncheva performs songs in 10 languages and performs successfully in different musical styles: jazz, pop, rock and blues. She is a performer with an unambiguously recognizable singing style, rich in overtones, a "velvety" voice, within four octaves. In 1992 she has starred in the first television show "Hit Minus One", where, within one song, "Smiles from the Old Lanes", demonstrates her unique talent to mimic and recreate even the smallest detail of the interpretational style of different performers.

In 2015 she performs a solo concert at the opening of the Bulgarian exposition of Thracian art in the Louvre to diplomats from all over the world, who cheerfully applauded the rare talent of the Bulgarian artist with the ease to present the musical-song legacy of different people. A year before, Nadia Toncheva participated in a program in the "Week of Bulgarian Culture" at the Bulgarian Embassy in Bern - Switzerland.

In 2017, she releases a CD "Black coffee", which is a compilation of popular jazz standards, performed by her and some prominent Bulgarian jazz musicians.

PEDAGOGICAL ACTIVITY
Since 2007 Nadya Toncheva is a teacher of "Pop and Jazz singing" at the National School for Music and Performing Arts "Hristina Morfova" - Stara Zagora. For this period, her students have won over 100 awards from national and international competitions.

AWARDS
In 2016 she was awarded the State Award "Golden Age" - a star for contribution to Bulgarian culture.